**Update – have found out thanks to the below comments that a German brand named ‘Pöschl Tabak’ offers vegan cigarettes! Also since returning to the UK I’ve noticed Vaping has vegan options so will write a blog about that at a later date**

First lets get this out the way. I’m a vegan, but I smoke. Or at least I did smoke until I discovered smoking was not vegan.

I’m not talking about the environmental impact or the health issues, as those are non essential vegan worries – but at base level – not consuming animal products – smoking is non vegan.

I discovered this when I watched a documentary, where it stated that the fur trade supports the smoking industry by giving dead beavers to tobacco companies for their Castoreum.

Castoreum – more Here – is the exudate from the castor sacs of the mature North American Beaver (Castor canadensis) and the European Beaver (Castor fiber). Within the zoological realm, castoreum is the yellowish secretion of the castor sac which is, in combination with the beaver’s urine, used during scent marking of territory.

Ok what?! I hear you ask…. Well I started researching, and it turns out most pre-rolled straight cigarettes DO have Castoreum in them. Ewwwwwwww.

Not just that, but when looking into tobacco companies that didn’t use this in their cigarettes, I ended up finding out a whole list of other non vegan ingredients that straight cigarettes contain such as gelatine in the filters.

So what about loose tabacoo? Well as far as my research goes, there is only one tobacco company that doesn’t use animal ingredients in their blend – American Spirit. This is 100% vegan, and the brand say they don’t test on animals! YAY!

So as long as you smoke without a filter, you should be ok right? Wrong.

When you look up the owning company of American Spirit- not just the brand – they are owned by the R.J.Reynolds Tobacco Company Who are notoriously horrific animal testers – more HERE – so what do you do?

My only clear answer… Shisha.

Obviously I can hear everyone is saying just give up! And yes I have the perfect excuse and haven’t smoked a cigarette since before christmas, however I like smoking and don’t want to quit, and I know that sounds silly but if and when I do find a vegan cigarette, only then will I decide if I’m going to start again or quit for good.

But until then, believe me when I say, this is the best option we vegan smokers have. 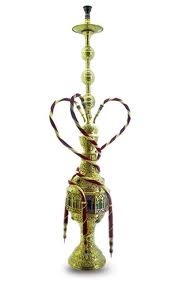 A hookah (Arabic: حقہ‎, ḥuqqah, hukkā, Hukić, ‒ also known as a waterpipe, narghile, arghila, qalyān, or shisha) is a single or multi-stemmed instrument for vaporizing and smoking flavored tobacco called shisha in which the vapor or smoke is passed through a water basin ‒ often glass-based ‒ before inhalation. 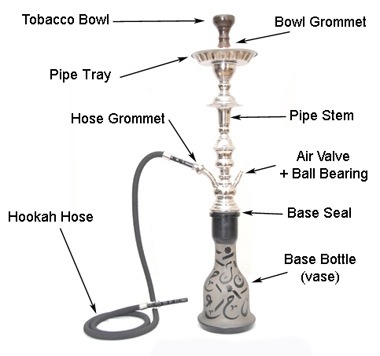 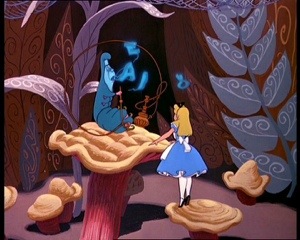 The tobacco that you effectively melt is made of up tabacoo, fruit purée and molasses. So 100% vegan! and pretty tasty.

Living in the Middle East, I’m pretty spoilt as they’re everywhere, but you can get them all over the world.

So heres how you do it:

Fill the top bowl with your tobacco, don’t overfill or you will find it burns easily and doesn’t smoke well.

Cover your tobacco with silver foil and pierce holes for the heat to seep through. 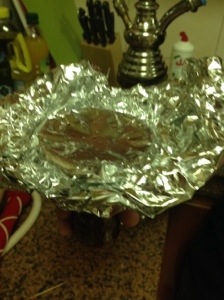 Now heat your coals – try to get natural coal (coconut shell) otherwise you’ll be smoking what tastes like petrol – which is unpleasant to say the least! We bought an electric coal lighter, as it takes about 3 minutes and saves burnt fingers with a blowtorch! 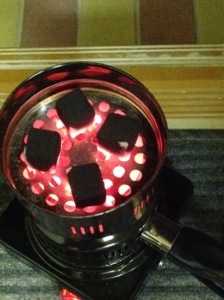 Whilst your coal is heating, you want to fill the base of your Shisha up with water (there will usually be a pipe that sticks out the middle that you can pour water out/ fill with) fill the base about 3/4 full and give a good suck on your pipes pipe. Ooooooooo eeeeerrrrrrr.

If the water bubbles when you suck without coming up the pipe you know you’re good to go! (Hence the name Hubbly – Bubbly!)

All you have to do now is add the white coals and enjoy!

Remember to turn the coals every now and again, to keep the heat going, that way you will be able to smoke for longer and keep the flavour. I tend to find it will last about thirty minutes max with three coals.

Anymore than three and its too hot and your tobacco will burn.

Obviously be safe, don’t burn yourself or go to bed with hot coals burning in your lounge! But equally give it a go, if you like smoking, especially the social aspect of it, and like me cant seem to find a vegan smoking alternative this might be the best answer.

If you do know any truly vegan brands/options let me know! X